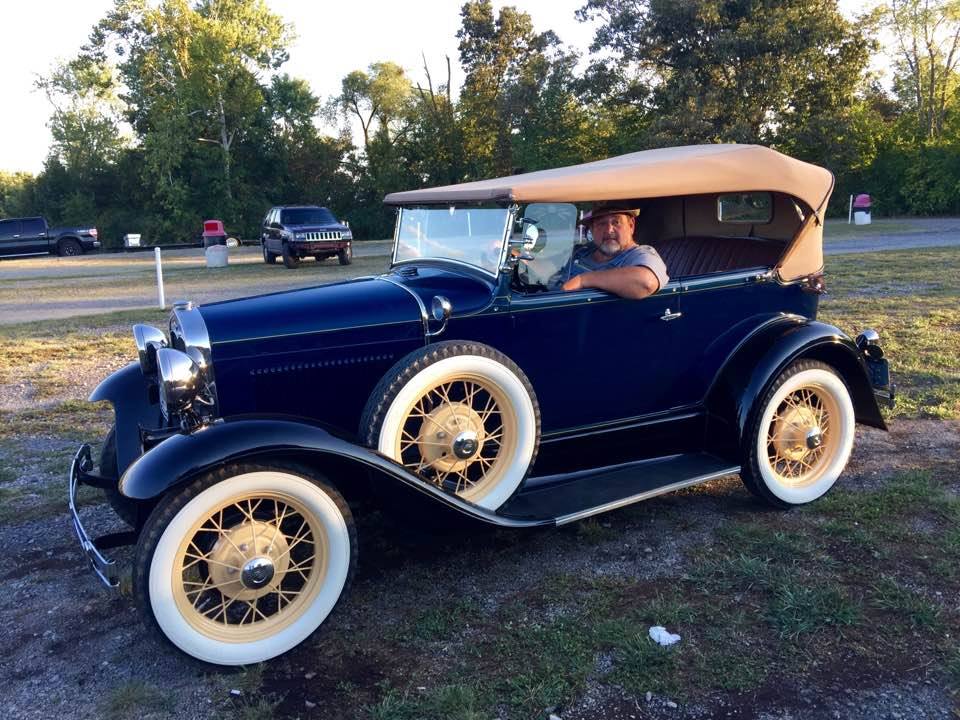 In 1953, several members of the business community in nearby Maryville, Tennessee, were searching for a way to promote Blount County to tourists and raise funds to build a civic center

and auditorium. After much consideration, it was decided to hold a festival celebrating the life and lore of past settlers. It would be called “Hillbilly Homecoming” and would be a week-long affair with top-name country music stars performing nightly, along with crafts and local exhibits of all kinds each day.
As the time came near for the first Hillbilly Homecoming, the event committee decided to locate an “old” car to carry country and western singer Roy Acuff and other entertainers from the airport to Maryville. After inquiries were made locally, the committee discovered there was an old car stored in the barn at Coulter’s Florist, one of the oldest, family-operated businesses in Maryville. Thus, contact was made with brothers Charles and Kenneth Coulter concerning use of the car.
The 1916 Ford Model T touring car had been purchased new by the two brothers’ Uncle Newt and had not been cranked, much less driven, since 1946. After some persuasion, the brothers agreed to get the old T running in order to haul the guests to the festival.
The 1953 Hillbilly Homecoming was a huge success, attracting more than 3,000 spectators. In fact, it was so successful that it was made an annual festival. The event committee noted that entertainers Roy Acuff and Pee Wee King were very complimentary about their special ride in the Coulters’ Ford.
When Charles and Kenneth got the call for use of the ‘16 T again the next year, they knew some work was going to have to be done on the car in order for the old Ford to be more presentable. This being in the days before reproduction parts and tires, the brothers enlisted the help of a local Firestone dealer to locate original 30 x 3 front tires. After additional light maintenance, the old T was once again pressed into service as the official guest transporter for the second Hillbilly Homecoming. The car was given a police escort through downtown as locals gathered and cheered. After seeing the crowd’s reaction, plans were made to add a parade with floats, bands and even other antique cars, if they could be found, to the annual festival’s activities.
By the time the 1955 Hillbilly Homecoming came around, Charles and Kenneth had done extensive work restoring the ‘16 T. Additionally, Kenneth had purchased and restored a 1927 T roadster for the parade. Word about the use of antique cars in the parade spread to A. L. Christenberry of Knoxville. A.L. contacted Bud Campbell and C. B. Neubert, and they all agreed to participate with their old cars as well. The addition of these cars to the parade was such a success that many locals began searching for old cars on their own.
As the 1956 Hillbilly Homecoming approached, people from all over East Tennessee began contacting the Coulter brothers, wanting to be included in the parade and festivities. By this time, Charles and Kenneth both had car fever and had purchased several vehicles. Coulters’ “Ford Haven,” as it was called by locals, had expanded to nine cars.  The brothers spearheaded the 1956 parade and used all of their vehicles along with other cars from the area. Bud Campbell, Ralph McCall, C. B. Neubert, Emory McCampbell and Captain Marvin Hempbell were just a few of the participants in that year’s parade which boasted a total of 39 antique cars.  As in past years, the Hillbilly Homecoming was a huge success, but it was obvious that the newly  expanded antique car parade had stolen the show. Not only that, but interest in antique cars had spread like wildfire.
In the months following the 1956 Hillbilly Homecoming, more and more people looking for antique cars or searching for parts contacted Charles and Kenneth. Seeing the rise in interest, the brothers decided it was high time for an antique car club to be formed in East Tennessee.
After spreading the word, they scheduled an organizational meeting, which was held in the truck garage at Coulter’s Florist on November 19, 1956. On the day of that first meeting, the brothers secured the loan of about 50 folding chairs from a local funeral home and set them up for the meeting. That night a crowd of more than 100 people attended. Kenneth was selected as the region’s first president and 72 people signed up as charter members. The next day, the Coulters mailed the application for charter to AACA national headquarters. The East Tennessee Region was granted its charter on February 2, 1957.
In the years since, the East Tennessee Region has been involved in many events, both locally and nationally. The club participated in the Hillbilly Homecoming until its demise in 1967, hosted the Gatlinburg Invitational Car Show for many years in the 1960s and 1970s, hosted the 1969 and 1985 Glidden tours, hosted AACA national meets in 1967, 1972 and 1998, and hosted the 2003 and the 2015 AACA Southeastern Divisional Tour. Additionally, several club members have served nationally in different capacities. Four members have served as past AACA presidents: Harold Coker (1972), Jerry Hodge (1973), Tom Howard (1998) and Bo Croley (2006). Several members have also served as national board members in the past. Many members have been extremely active in the national judging program, including one of the founding members, Charles Coulter, who judged more than 200 national meets.
Now, as the East Tennessee Region once again welcomes friends and fellow hobbyists to the area, the club hopes to live up to the high standards set by Charles and Kenneth Coulter and the other charter members of our club.
—Randy Moats, ETR AACA Club Historian